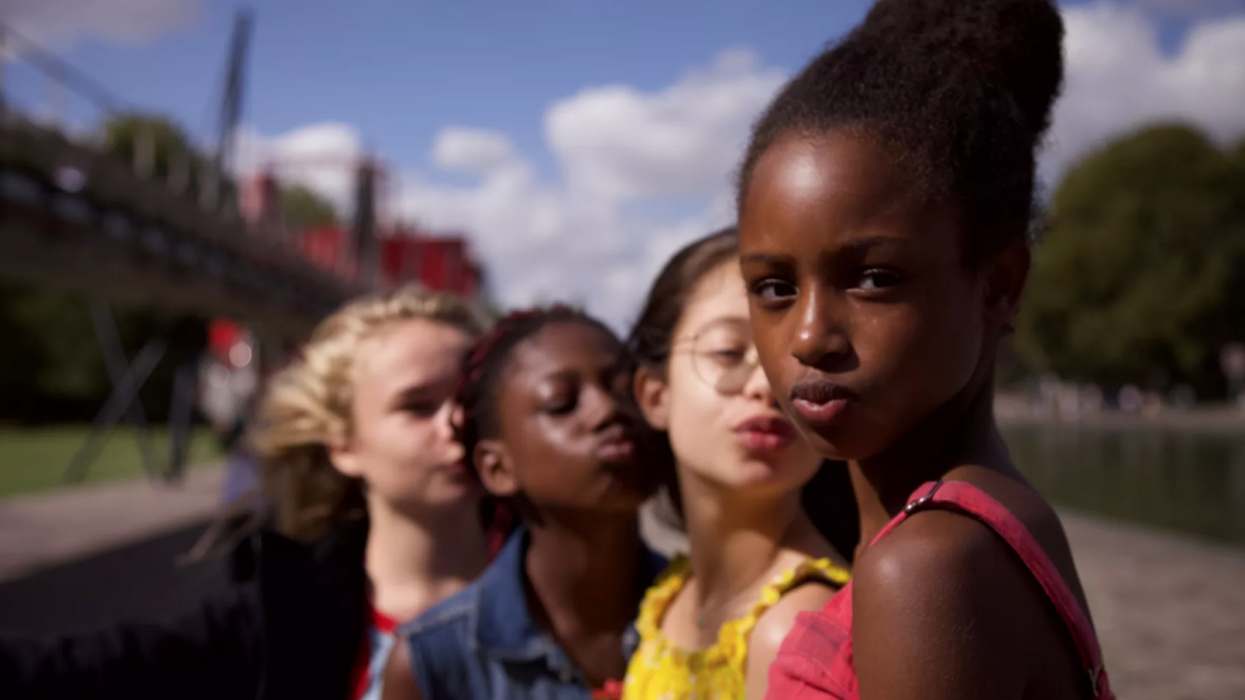 Plague. Recession. Riots. Looting. Fires. Murder Hornets. And now, as we round the third base toward the home stretch, 2020 gives us Cuties, a delightful French coming-of-age film by Maïmouna Doucouré that's half Stand by Me and half Coyote Ugly – if you were to combine both films into an anthropomorphic entity and then forcefully dip its toe into the perilous waters of pedophilia.

Cuties begins by showing us an 11-year-old Senegalese girl named Amy, whose fundamentalist Muslim family has recently moved to France. We learn that Amy's father has gone back to Senegal to bring home the woman who is to become his second wife. The mother's struggle is very clear to Amy, who begins right then and there to develop a hatred for her father. She starts looking for ways to rebel, and soon lands in the company of a group of ne'er-do-well girls, who fancy themselves dancers and have adopted the group name "Cuties". Their primary goal in life at the moment – and the thing that drives the film's narrative – is to participate in and win the big dance competition coming up soon. The ring-leader – a dark-haired bespectacled girl who resembles Alexandria Ocasio-Cortez to such an eerie extent that it can't have been on accident (more on that later) – lives in Amy's building, and the two form a kind of delicate friendship throughout the film.

Here is where the movie most resembles a female version of Stand by Me, and it's also where I began to understand that this is a remarkably beautiful film at times. It's well-shot, well-scored, and well-acted. In fact, Fathia Youssouf Abdillahi (the actress who portrays Amy) is quite possibly the most talented child actor I've ever seen.

I began to understand that this is a remarkably beautiful film at times.The portrayal of this group of girls wending their way through the thick tangles of childhood and constantly grasping at what they perceive to be higher concepts of adulthood is somehow both charming and bothersome at the same time. Knowing virtually nothing of the real world of sexuality, they engage in a kind of whimsical speculation as to how sex works that almost comically mirrors the aforementioned Oscar-winning film (and a ton of other coming-of-age movies as well). Some of this is fine. There's a particularly funny-turns-emotional moment when one of the girls, upon finding a used condom lying around in the woods, blows it up like a balloon and begins playing around with it. The other girls – who at least know enough to know that one doesn't touch such things for fear of disease – immediately recoil from her, tell her that she's going to catch AIDS, and so embarrass and frighten her that she begins to cry. The scene is, again, beautifully shot, and I found myself sympathizing with the character as she feels an overwhelming moment of ostracization-through-misadventure. In the following scene, we are treated to a montage of the girls washing her mouth out with soap, and it breaks the tension.

All of that to say that not only does this movie have plenty of redeemable moments that are on the beat film-wise, but also that it will pull you in headlong whether you want it to or not – which is what a good film is supposed to do.

But, alas, there's more. And I'm not so much talking about the risqué dancing that's done throughout the film. Here's why: as if the plot structure of every coming-of-age story didn't lay it out clearly enough for us, kids strive to be adults. The results are often hilarious, sometimes disturbing, but it's their nature. Kids want to be more like adults. And in a world – such as the one depicted in this movie – where children either can't or won't seize on the example of adulthood provided by their own parents, a vacuum is created. And nothing fills the vacuum of responsible parenting better than social media.

For the girls, it is the well from which they draw their inspiration, acceptance and love. "Likes" are the currency of the realm, and if you don't think this is true in your own kids' world today, you need to wake up and smell the Zuckerberg.

Thus, it is no surprise that these young dancing girls are modeling their very existence after what they see in online videos, and regurgitating the same back at the soulless machine. That they would be twerking and gyrating in a manner that falsely suggests they do know a thing or two about sex is normal when you consider that they're dining daily on visual and musical junk food – art perhaps not entirely without merit, but certainly without taste. And if there's one thing about the movie that phone-it-in parents might do well to see, it is perhaps the juxtaposition of budding childhood and the laissez faire morality adhered to by the demigods of popular culture. In short: these girls are just trying to be like the only set of role models afforded to them.

Here's what should (in my opinion, anyway) not be okay, though.

Aside from the moments of dancing, this film is filled with the cinematography of sexuality. When you watch any film in which there is a femme fatale character (or in some cases several of them), the way in which they are shot by the camera is extremely suggestive of overt sexuality. To quote one of my favorite online film critics: "You may not have noticed, but your brain did." Tracking shots over women's bodies, particularly up their backside or across a heaving bosom all decorated in cleavage, are a stock in trade for many filmmakers (and the only one for some of them). It's so common in the making of movies that it's often lampooned as a trope.

I'm reticent to accuse the woman who made this film of directly catering to the desires of pedophiles – but... I can't completely dismiss the idea, either.We'll save the discussion about whether or not this is offensive when actresses in their twenties and thirties do it for another time. What I would hope we could all agree on is that you don't – in good conscience – use those same tracking shots over the bodies of a group of 11-year-old girls, even to make a point. And you certainly don't do it over and over and over throughout the course of a movie. The unstated purpose of such shots in a regular film is to give the viewer a taste of the voyeur. You wouldn't be allowed, in polite society, to walk up to a woman and stare at her from inches away, scanning down her body as if you were about to fax her someplace. But with the movie camera, you get a little taste of that. Dopamine rushes to your brain, and you're instantly glad you shelled out the twenty bucks to see the movie.

And while it's theoretically possible that the unstated purpose on behalf of the filmmaker changes when the subject is a little girl, it can't be denied or even overlooked that, for a certain subset of the viewing population, the effect does not. I'm reticent to accuse the woman who made this film of directly catering to the desires of pedophiles – but after having sat through an hour and a half of shot after shot of this very overt technique, I can't completely dismiss the idea, either.

As Amy progresses down the path that her (barely) world-wise friends have chosen, she becomes far more steeped in it, because she has no sense of the unseen boundaries which exist even in a hedonistic postmodern society such as present-day France. She spirals out of control very quickly, trying to outdo her friends in overt displays of sexuality and even violent aggressiveness. If there is a redeeming quality to the message of the movie, it is that we are fairly explicitly told through what we see her go through that this is not the best life for her. That escaping from the oppressive Muslim traditions of her family is a thing she should seek, but that this is not the way to go about it. All throughout her journey, we are subjected to close-up images of her body (and the bodies of the other girls). At one point, Amy's mother and aunt seem to be performing a kind of exorcism on her to drive out the evil rebellious spirits they believe have taken over, and Amy vibrates in the middle of the room on her knees in a paroxysm of movement which is half-dance, half-apparent-demonic possession, and all sex. I don't mean to be graphic here, but she may as well have been doing a full-on sex scene, for all the heavy breathing and gyration and rank passion that's going on. As an adult – and particularly as a parent – it made me literally feel ill to watch.

In summary, I can't really put any sort of seal of approval on this film, despite part of me wanting to. I generally subscribe to the idea that showing us a thing is far better than telling us a thing – but there are limits, and I think Cuties crosses them. As much as I want to believe that the director's motives are pure as the driven snow, it's not lost upon me that – as I mentioned before – one of the main characters (with whom we are meant to be sympathetic multiple times throughout the film) is very obviously meant to be the prototypical girl-who-wants-to-be-AOC. This film is at war with its own supposed message – it seeks to convey the horrors of oversexualized youth while laying out on for open display an entire smorgasbord of pedophilic fantasies. The game simply isn't worth the candle.